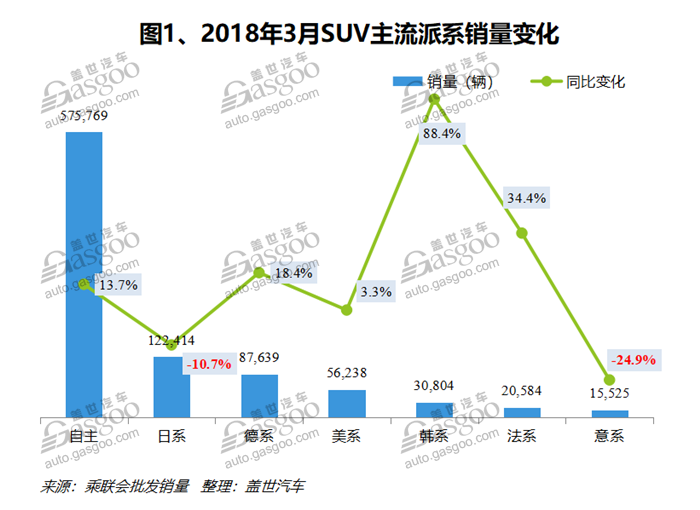 From the perspective of the distribution department, the SUV sector has generally risen, with autonomous, German, U.S., Korean, and legal systems showing a growth trend, with Japanese and Italian systems showing a downward trend. The sales volume of self-owned brands increased from the same period of last year, and its market share accounted for 62.8% in March. 575,769 new cars were sold, up 13.7% from the same period of last year. Among the self-owned brand SUVs with a relatively large share, only the Haval brand appeared 18.2% year-on-year. In addition, Changan, the top ten brands, saw a smaller year-on-year increase. In March, a total of 70,508 SUVs were sold, an increase of 1.1% year-on-year. Geely was the runner-up in sales of SUVs this month, a year-on-year increase of 65.1%. In March, a total of 63,575 SUVs were sold, continuing to maintain growth across the board. Apart from this, Baojun, Roewe, and Zotye have also seen relatively high growth. It is not difficult to find that such brands have more models for less than one year after listing, which has contributed to the overall growth.

The Japanese brand SUV market sold 122,414 new vehicles in March, a year-on-year decrease of 10.7%. Among them, Honda CR-V sales fell to 1,092 units due to the ban on sales, which was a year-on-year decrease of 93.5%; German-brand SUV sales rose 18.4 percentage points year-on-year to 87,839. Vehicles, luxury brands still only in the top three Mercedes-Benz 2.9% year-on-year decline; the United States Department of the brand sales in March SUV fourth, a total of 56238 new cars sold, an increase of 3.3%. Sales volume of Korean SUVs increased by 88.4 percent year-on-year in March. Total sales of new cars were 30,804, of which 12,616 were sold in the new ix35 bicycles, up 603.6% year-on-year. The low-price strategy injected new vitality into the entire brand.

The legal brand SUV increased this month, and sold 20,584 new cars, up 34.4% year-on-year, of which the Peugeot brand increased by 26.2% year-on-year, and the Citroen brand's good sales rose by 174.1% year-on-year. Overall, the SUV market's single commodity market has a greater impact on the overall market. 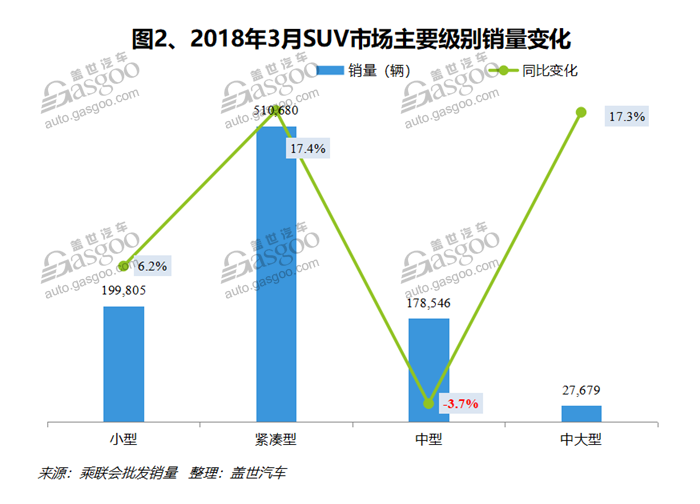 From the perspective of market segments, the market share of compact SUVs dominated by 55.7%. In March, its sales volume increased by 17.4% year-on-year to 510,680 units. The sales volume of small SUVs increased year-on-year, with an increase of 6.2% in March and sales of 98,005 vehicles. The decrease in the sales of medium-sized SUVs narrowed, with sales in March reaching 178,546 units, down 3.7% year-on-year.

The growth trend of medium to large-sized SUVs has slowed down. In March, sales volume reached 27,679 units, up 17.3% year-on-year, accounting for 3.0% of the total SUV market share. After the completion of various brand product lines, the growth of medium and large-sized SUVs will gradually slow down. 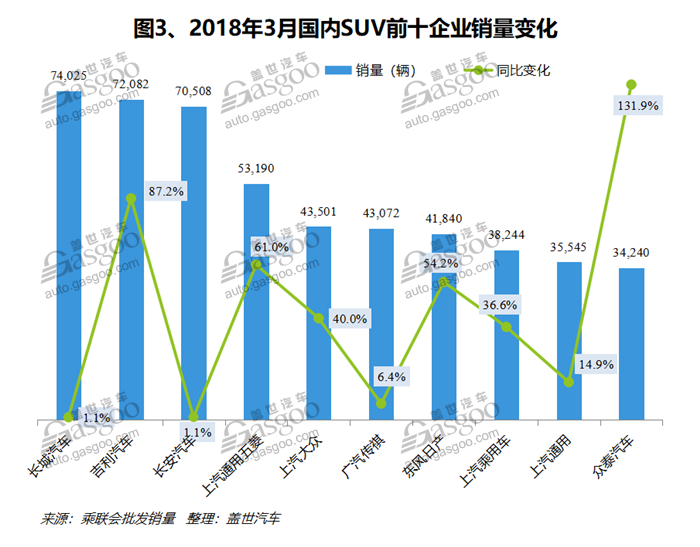 Dongfeng Nissanâ€™s SUVâ€™s SUVs both showed an upward trend year-on-year, of which Qijunâ€™s sales were 17765 units this month, a year-on-year increase of 94.3%. The total sales of this monthâ€™s 16646 units were up 6.7% year-on-year. Jinke and Loulan also achieved good market segments. Achievements.

SAIC-GM-Wuling ranked fourth this month. Baojun 510 vehicle sales once again surpassed the Haval H6 this month. Baojun 530 was listed less than a month in January. It achieved sales volume of 12032 units, exceeding the discontinued Baojun 560 just around the corner. Changan Automobile's March SUV sales increased by 1.1% year-on-year, and its sales were in close competition with the former Great Wall and Geely. The strength of their new models after the launch of the new model should not be underestimated. Sales of SAIC Volkswagen's March SUV continued to drop to 40.0% year-on-year, while the Skoda brand's year-on-year increase was as high as 430.0%. 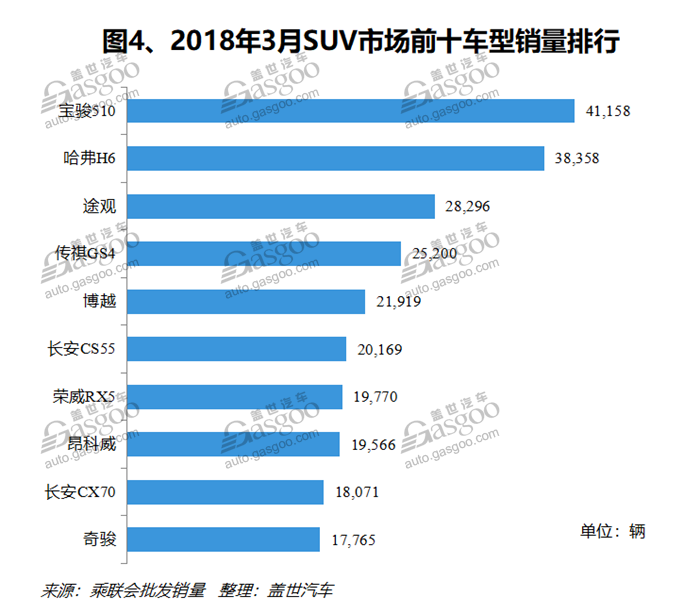 In the last five models, the Changan CS55 is closely following Bo Yue and sells a total of 20169 new cars. Changan CX70 entered the top ten list this month. It sold a total of 18,071 new cars, ranking the ninth, an increase of 18.7% year-on-year. It is expected that the listing of the new Changan CS75 will make the Changan brand a step further in the SUV field.