The foundation of the J10MPV project of Jiangsu Jiulong Automobile Manufacturing Co., Ltd.

On the morning of January 8, 2012, the foundation laying ceremony of the J10MPV project of Jiangsu Jiulong Automobile Manufacturing Co., Ltd. was held. It is reported that after the first phase of the J10MPV project is put into operation, the Jiulong Automobile J10MPV will have a production capacity of 50,000 vehicles per year. The project will be completed and put into production, and will realize sales of about 15 billion yuan, profits and taxes of 1.5 billion yuan, and provide nearly 1,000 jobs. 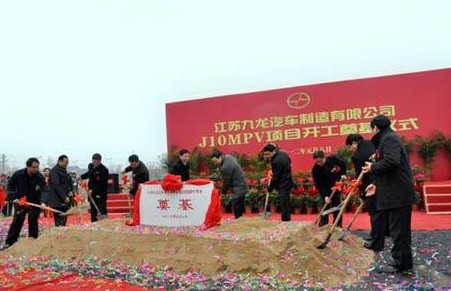 The J10MPV project has a total investment of 2.2 billion RMB and a total construction area of â€‹â€‹100,000 square meters. The first phase of the project is an annual production of 50,000 vehicles in a single class, including stamping, welding, painting, and assembly. The four major processes and civil and public facilities are provided; The project will build an auto parts production base with an annual output of 100,000 gearboxes and an annual output of 200,000 sets of axles.

As one of the young domestic independent brands, Kowloon Motors has maintained a high level of vitality. In just four years, Jiulong Automobile has successively launched the A5/A6 series, the Big MPV series, the VIP VIP series, the special-purpose vehicle series, and the Kaosite series. The meticulous preparation of the J10MPV project for more than two years will now be launched, which will greatly enhance the competitiveness of Kowloon Motors in the industry. The deputy mayor of Yangzhou City, Wen Daocai, Jiangdu District Party Secretary Ni Shijun and other leaders attended the foundation laying ceremony and delivered speeches.

About Jiangsu Kowloon:
Jiangsu Jiulong Automobile Manufacturing Co., Ltd. is located in Yangzhou, an emerging historical and cultural city in the middle and lower reaches of the Yangtze River. The company was incorporated in 2007 and is mainly engaged in the research and development, production, sales and service of luxury commercial vehicles and large and medium-sized passenger vehicles. The company currently produces 10 to 15 large commercial vehicles. The company worked closely with Japan Toyota Corporation at the product launch stage. Toyota's senior engineers and technicians provided full guidance and technical support for product development and production processes.